(Yet) Another bread board, but as usual I tried out a few new ideas / techniques in the making of it. The main new (for me) idea here was to have a wavy design instead of straight. I used some Maple that had been in the house for months, so wood movement shouldn’t be an issue. The wavy stripes were African Mahogany.

The design I had in mind called for a piece of wood thin enough to be bent without breaking, sandwiched between two pieces which form the two exactly-matching halves of a wave shape. And that was the crucial part – they must fit together exactly. Additionally, my design was to be symmetrical so I needed to form two wave shapes that matched. One option was to cut the wave in the wood freehand using the bandsaw. Theoretically that would have worked, but I didn’t rate my chances of being able to accurately cut two matching curves. So I decided to use the bandsaw to make templates which I could then use, in conjunction with a bearing-guided router bit, to trim rough-sawn pieces to the exact shape. So all I needed to do was to make an accurate template.

The first job was to draw the wave. I remembered I had a ‘flexible curve’ in a drawer somewhere that I hadn’t used for decades. I found some 18 mm plywood to use, and cut it to size on the table saw. 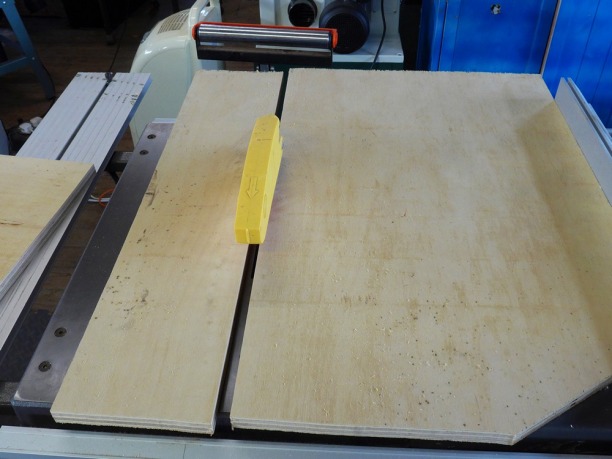 I decided that the line wasn’t central, so I drew it again about 1 cm further in. Then I cut along that line using the bandsaw 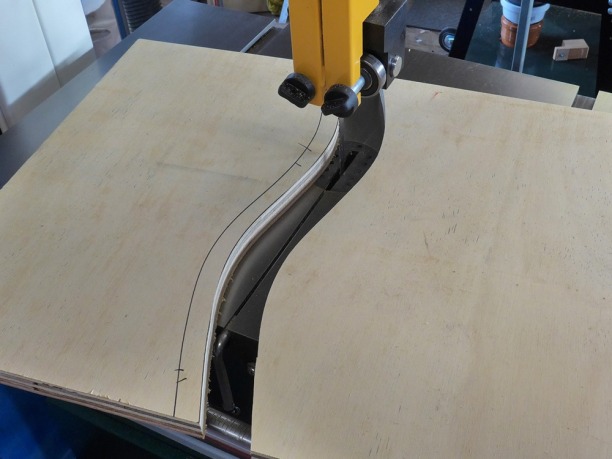 About 10 cm from the end of the cut, the blade started veering away from the marked line, so I stopped pushing the work-piece, adjusted position slightly and then continued the cut. This was a bad move because it meant that the gap was no longer consistent along the whole cut. 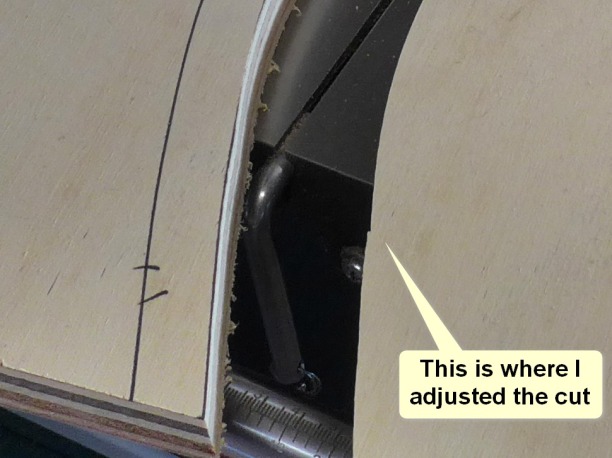 I brought the pieces together standing one on top of the other and, with a bright light behind, looked along the line and checked where the light shone through. I tried fixing the error using the spindle sander. I even dug out and sharpened the blade on my old convex spokeshave,

.. and tried using that to adjust the curve, but that proved useless. I realised that I could be there forever, messing about. I decided that the best thing to do was to start again and use the bandsaw to re-cut the line, which should theoretically cut out the gap.  So I glued the two pieces back together again (the gap can be seen to the left)

This time I made the cut without stopping, but I wasn’t happy that I’d veered so far from the line (see above), so I glued them back together again! Then I practised my cutting technique on a few scraps of plywood before cutting the template for the third time! This time I was happy with the result; the two pieces fit together well and the bright light test revealed that the fit was good.

Next, I prepared the wood for the board, cutting to length and width on the table saw 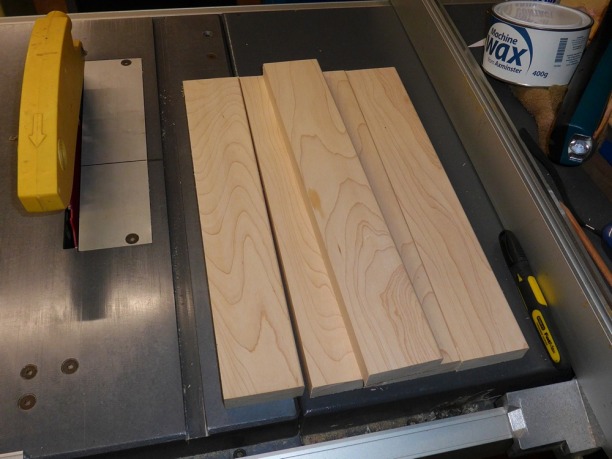 .. and then glued them together, making sure that all pieces had the grain running in the same direction (to avoid tear-out when planing later) 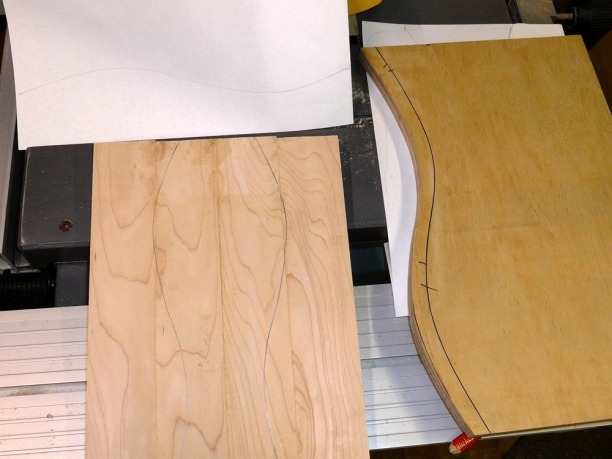 and then cut along those lines using the bandsaw

This time it didn’t matter if I wandered slightly off line while cutting, because the pieces would be trimmed to exact shape with the router.

Now that I had the pieces cut I could go ahead and build the jigs that would be used to trim them. Basically I just drilled a couple of holes through each of my template halves so that the work-piece could be held firmly while I routed the edges. A couple of bolts and knobs and pieces of mahogany were used for this. I used a piece of wood with the same thickness (in this case just another part of the board) to allow the clamps to grip the wood evenly. Not wanting to rely on the clamps alone to stop the piece moving, I also used a couple of small strips of double-sided tape between the work-piece and template. I also considered gluing some sandpaper to the template surface to provide grip. First I trimmed the two outermost parts of the bread board

.. and then I did the centre section. This (below) shows the part just before trimming. The work-piece is overhanging the edge of the template by 1-2 mm and the rough surface left by the bandsaw blade is visible 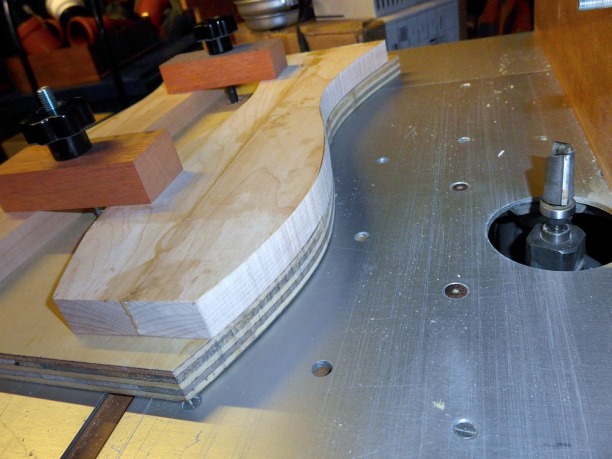 With some slight burning caused by the router cutter, the piece has now been trimmed to the exact shape of the template.

During the trimming I could feel the work-piece move slightly, so the double-sided tape was slipping (probably not helped by the fact that I had reused the same pieces of tape between cuts).

All three parts of the breadboard fit together well after trimming. I next cut four thin strips of mahogany just under 2 mm thick, slightly longer than the board and wider than the thickness of the board. This was so I could use two very thin pieces for each curve rather than one thicker piece that would have been more resistant to bending. I positioned the strips between two parts of the board and clamped up, causing the mahogany strips to bend into the shape of the curve. (I used the other outside part of the board loosely in position on the far side to allow the clamps to act on something square, as opposed to the other curved edge). I wanted to make sure that the mahogany strips ended up protruding from the board on both faces, so that I could trim flush afterwards. If I had rested the board parts and the strips directly onto the clamps I think there would have been a risk of the strips not being pushed down far enough, resulting in them being below the surface on the underside of the board. Using thin pieces of wood I raised the maple pieces about 2 mm off the clamps to ensure that the strips would be proud of the surface of the board on both sides. The disadvantage of this is that I could no longer tell if the tops of each part of the board were coplanar. Normally I would be able to feel for a difference between the two surfaces by running my finger over the join underneath, but the mahogany strip was protruding and preventing this, so I just had to eyeball the edge and hope for the best.

To make sure that the two pieces of maple either side of the strip were in the correct positions for their curves to match, I did a dry fit without the mahogany pieces and marked across each board with several pencil lines, which I made sure were lined up as I tightened the clamps.

A couple of hours later I glued up the second strip

and then block-planed the protruding mahogany strips to be flush with the surface. 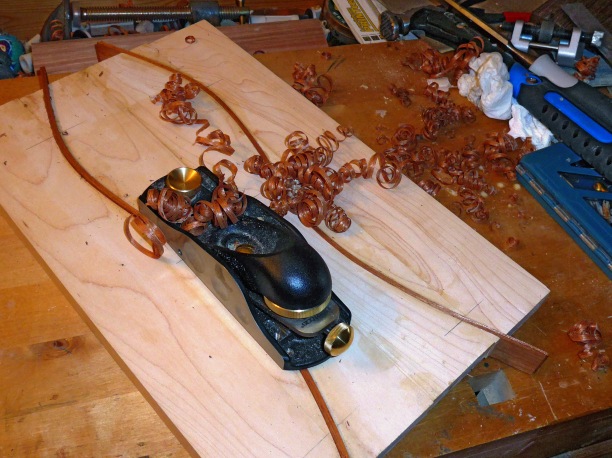 For various reasons this glued-up board was not as flat as it could have been. One reason was the aforementioned problem whereby I couldn’t tell by feel whether the parts were coplanar when I had clamped them together. The other reason is that I had originally cut all the pieces of maple from a board that was not straight, and I had made no attempt to rectify this before glue-up. So there were a few ‘steps’ between the various pieces.

I spent quite a while using the belt sander and my random-orbit sander (with 80-grit paper) levelling it.

That wasn’t the best way of doing it (unless you like turning wood into dust) and in my opinion wasn’t ‘elegant’. If I’d had a thicknesser wide enough (might get one soon), I could have used that. But I decided to try hand-planing it. So I sharpened the blade of my Record No. 4 Smoothing Plane and tried that. Almost straight away I had accidentally planed a step into the face of the board as the sharp corner of the plane iron had dug into the wood. I remembered that the plane iron should not be square across the cutting edge but have a very slight curved profile to it, so the middle of the blade does the work and the ends don’t dig in. So I took the blade out again and spent quite a while honing the edge into a very slight convex shape. I kept checking it against the light using an engineering square. Eventually I could see that it was very slightly convex. I installed the iron back into the plane and paid attention to setting the depth and alignment correctly. This time it worked brilliantly and I could take out all the high spots on the board and level up any misaligned joints. I noticed that the plane was only taking a very narrow shavings from the centre of the blade, maybe 15-20 mm wide. So I think I had curved the edge of the blade too much, even though it looked almost flat when lined up next to a straight edge. Anyway I was well pleased with the result – so much better than creating all that sawdust. I didn’t get any tear-out during planing because I had taken the trouble earlier to align the grain in all the clamped-up pieces. 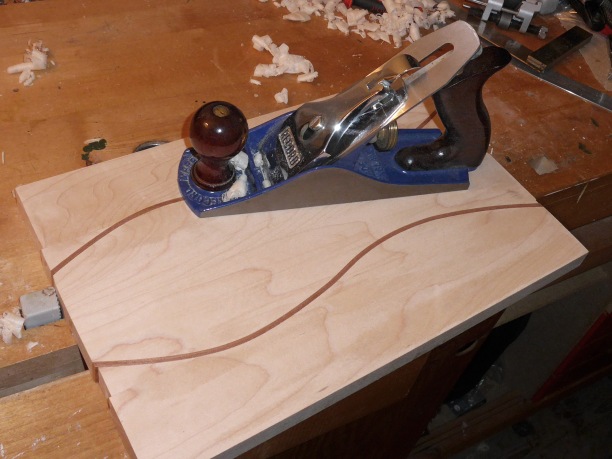 I still wasn’t sure exactly what shape the finished board should be, so I experimented in Photoshop with various shaped masks to see the effect, all the while considering how much work would be involved to realise each one.

I liked the look of the scalloped edge but decided to keep it simple and just leave it rectangular with rounded corners. And because it looked a bit like a fish I put an ‘eye’ in there!

First I trimmed the ends square on the table saw

And then using (for the first time) my new router corner templates (for which I’ve made a very nice box!), I first traced and marked the area to be removed with a pencil 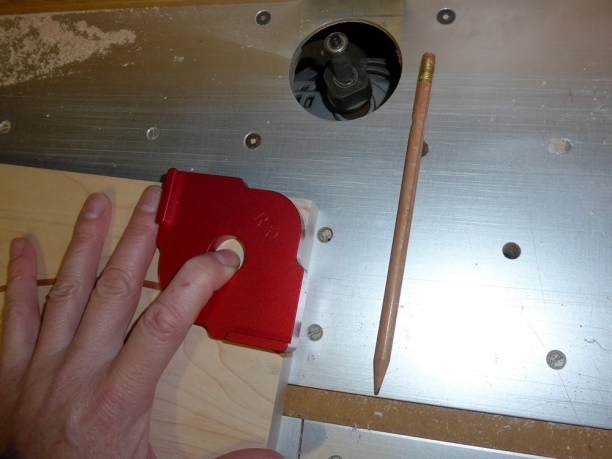 .. and then roughly trimmed most of it off on the bandsaw 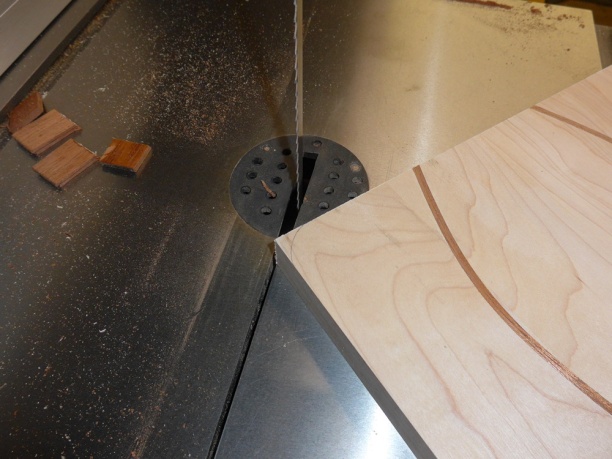 and then used the corner template to smooth the edges using a bearing-guided cutter in the router table. In an effort to prevent burning, I experimented with router cutter speed. I reduced the speed of the router on each successive corner until, for the last corner, it was as slow as my router could go. The slower speeds did produce lighter burn marks. 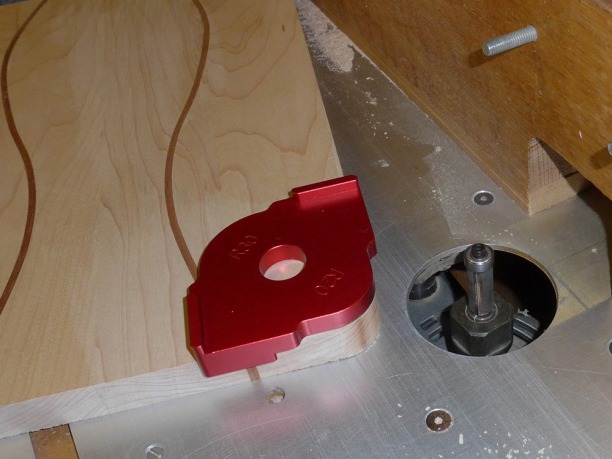 I next cut the hole for the ‘fish’s eye’, using a 3D bit in the drill press 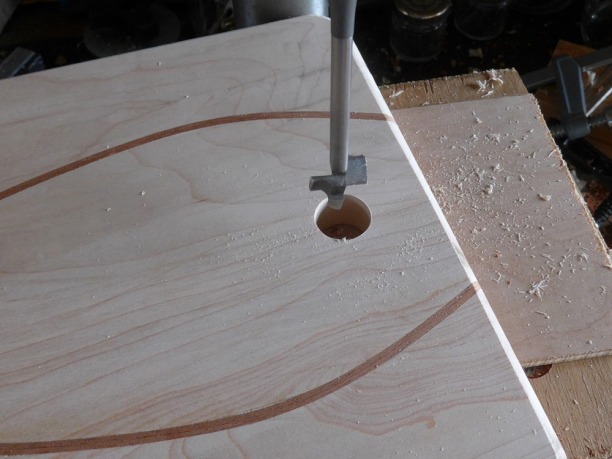 .. the edges of which I rounded over using a 3/8″ radius round-over bit in the router table. Normally I round the edges of a hole using the hand-held trimmer, but I discovered it can be done on the router table if you carefully position the hole centrally over the bit, lower it down and then make the cut, as briskly as possible to avoid too much burning.

With all the cutting and shaping done, it was time to smooth the faces and nicely round-over the routed edges, removing any burn marks in the process, using the random orbit sander with 180-grit and then 240-grit pads

Finally I gave it a coat of wax oil finish 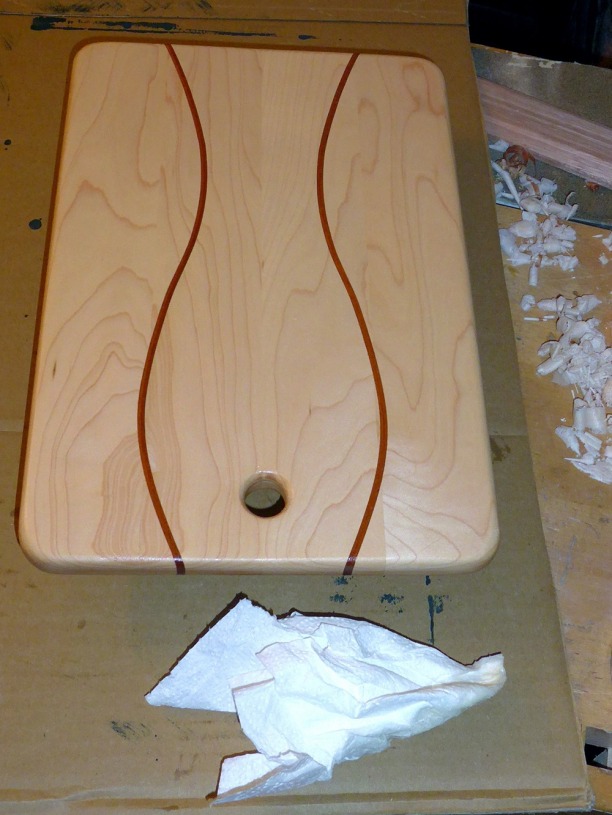 After a few hours I wiped off the excess and left it over night before buffing. 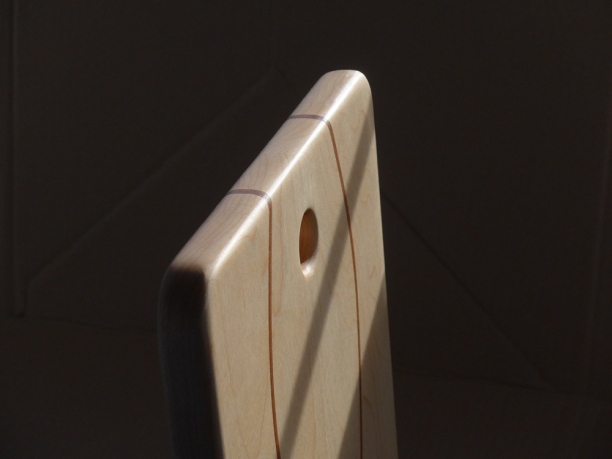 Click an image to enlarge it and scroll through other images. 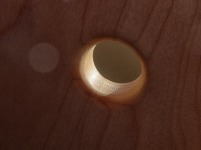 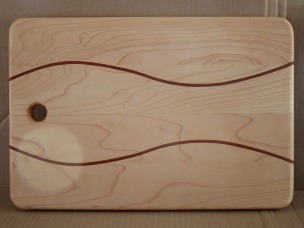 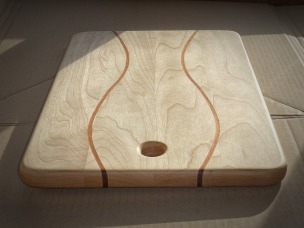 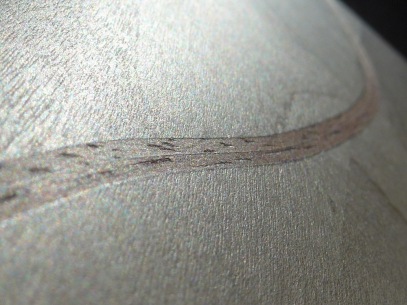 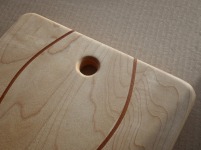 Things that didn’t work (and improvements)