For this project I transformed some African Mahogany fence posts into a useful garden tote. I also made what started off as a simple design significantly more complex, due to the joinery used and my aversion to using screws or any other metalwork to join wood to wood. My piece was inspired by something I saw in an American projects book

The original design called for 7/8″ thick timber. That seemed to be overkill to me, and would result in a very heavy item, even when empty. Also it had a solid bottom which would collect water if left outside in the rain or from water dripping off tools, etc. So I decided to use much thinner wood and to make the bottom and shelf from slats to allow drainage (and further reduce weight). I try to avoid screws whenever possible, so I used box-joints, loose tenons (dominos) and dowels to keep it together. I realised that the use of thinner wood would make my version look a little less rustic.

A couple of years ago I bought fifteen lengths of 54mm square rough-sawn African Mahogany from a fencing company on ebay.

Listed on the wood database as being ‘moderately durable’, I chose to use this mahogany over softwood for the project, reasoning that it would fare better than softwood in an outdoors-ish environment.

I resawed the mahogany down the middle

and then each strip down the middle again, to end up with lengths just over 12mm thick. 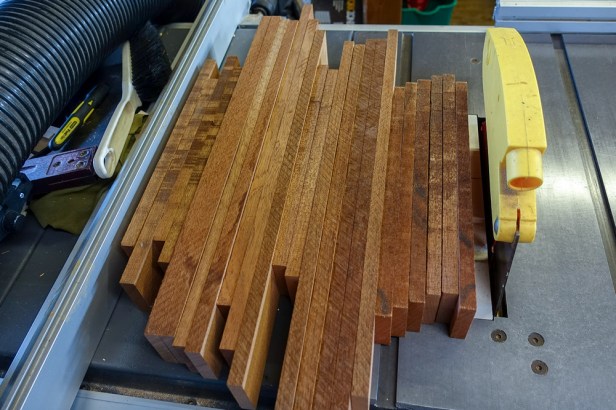 Then I thicknessed it all down to 11mm

I glued the strips into wider boards – 3 strips wide for the sides and 4½ strips for the deeper end pieces. I sawed the resulting panels to length and used my super-duper box-joint jig to cut quite large box-joints in the sides and ends, cutting two pieces at once 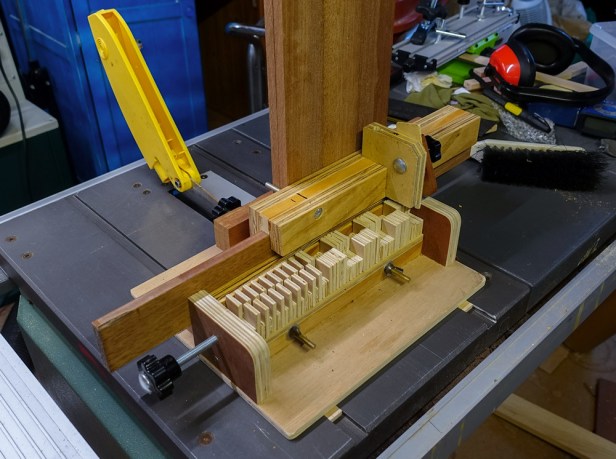 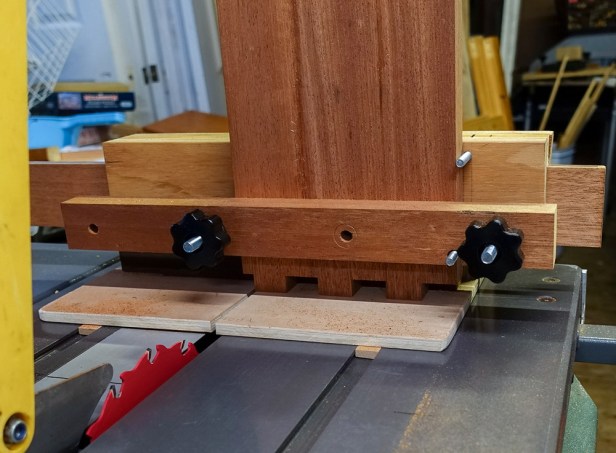 I used an online chord calculator to establish the radius of the curve to be cut in the top edge of each side. It was 1000 mm exactly. I used my bandsaw jig to do this, but accidentally cut the wrong edge! I had cut a curve into the lower edge of the box. Doh! After considering my options, I decided to just glue the cut-off piece right back on, and then proceeded to cut each side from the correct edge. For some reason, the bandsaw was leaving a very irregular cut and drifting off the line. I couldn’t understand why it did this, until later. I smoothed the curves using the spindle sander.

Using two stop blocks on the router fence, I cut a section out of the base of the end pieces to form ‘feet’, using a 12mm straight cutter

… and the corresponding mortices in the side pieces. I didn’t do much accurate measuring for this. I just sort of eyeballed it 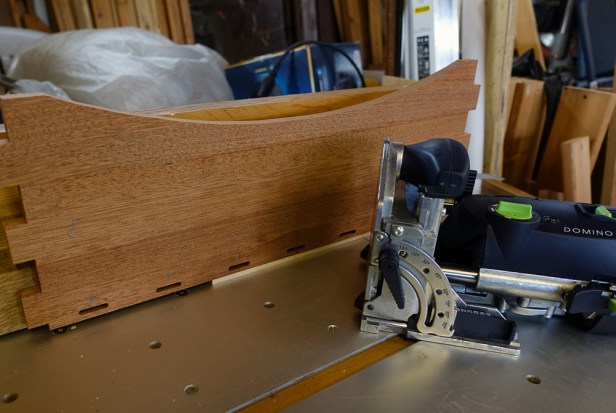 It was taking shape. I painted the slats at this stage, thinking it would be easier to do them now rather than after assembly

The only things left to make were the internal dividers and the handle. I decided to rebate the handle posts so that their outer edge would be flush with the outside of the box, for a more aesthetically pleasing look 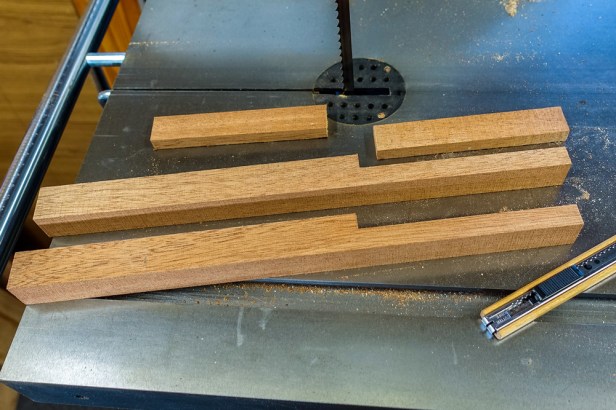 I ‘broke’ the sharp edges of the handle posts by rolling them on the belt sander, then I rounded the tops on the disc sander. 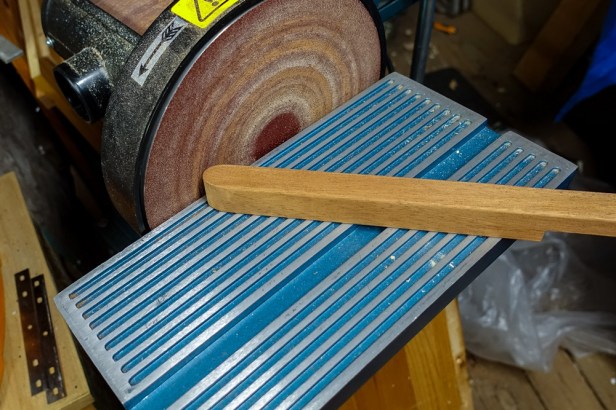 For the curves on the handle bar and on the central divider, I used the already-cut curve of a side piece as a template to mark the curve with a pencil and then cut almost to the line on the bandsaw.

I stuck one of the side pieces to the central divider, aligning the curve with the drawn curve on the divider.

I used a bearing-guided cutter in the router table to trim the divider piece exactly to the line using the side piece as a template to run the bearing along.

After unsticking the handle from the side piece, I rounded over the edges on the router table 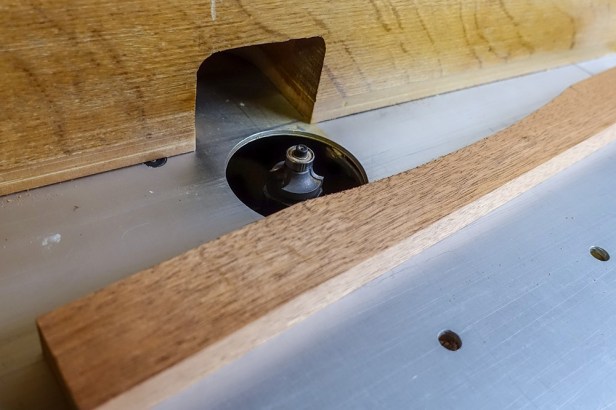 .. and then formed mortices in the ends of the handle using the Domino 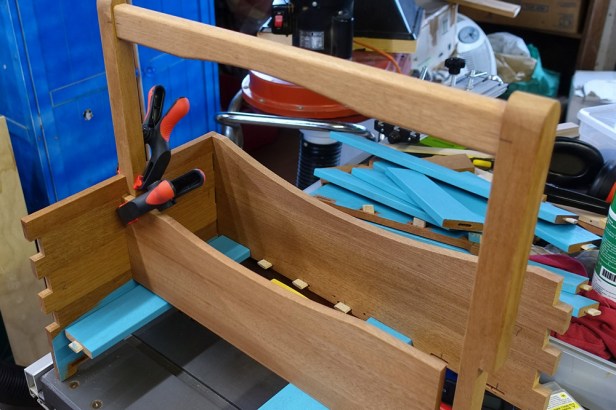 … and then cut the mortices using the Domino 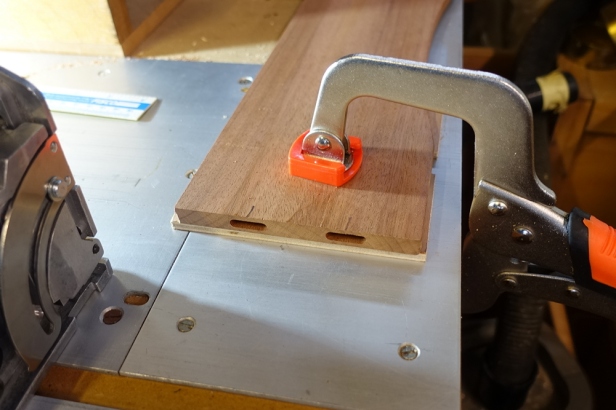 Because of the lack of depth available on the rebated sections of the handle posts, I trimmed the lengths of the dominoes, and marked them to remind myself these were short dominoes 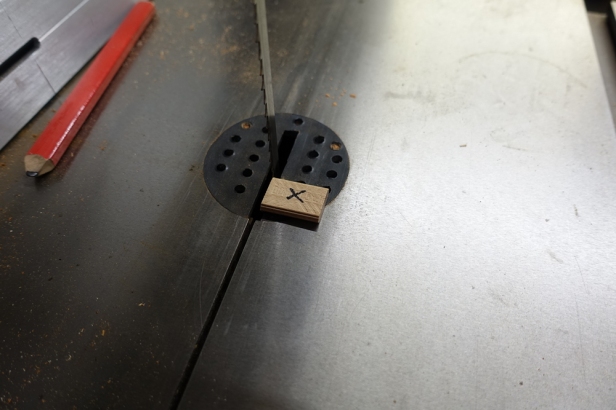 I made the two smaller dividers and morticed them in the same way.

First I glued the handle and central divider together, using Gorilla wood glue

and then glued the smaller dividers

For the remainder of the glue-up I used Cascamite, for its longer open time, because there were so many pieces. I ignored the instructions and put two tablespoons of Cascamite in a yoghurt pot and added water gradually while stirring continuously.

This time the Cascamite cured in the advertised six hours. I had heated the room to about 18°C.

Once the clamps were off, I sanded the protruding parts of the box joint fingers using the stationary belt sander. Not really the best tool for the job; I caused a couple of scuffs while doing it.

The pieces were now ready for the final coat of paint

The handle/divider assembly was attached to the main part using dominoes at the end of the small dividers, and then dowels from the outside into the handle posts. I thought I’d make a feature of the dowel ends, so I rounded them over using drill and sandpaper, and left them proud 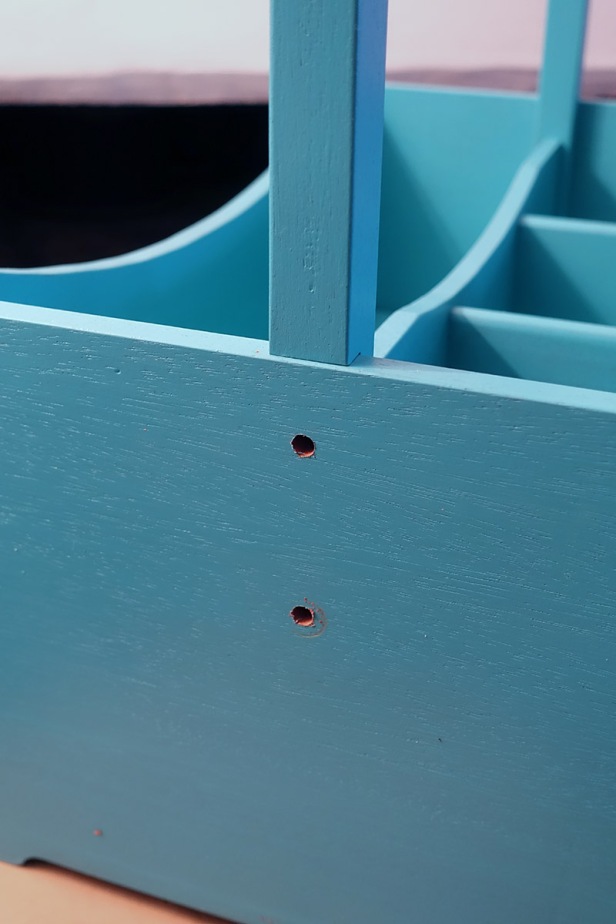 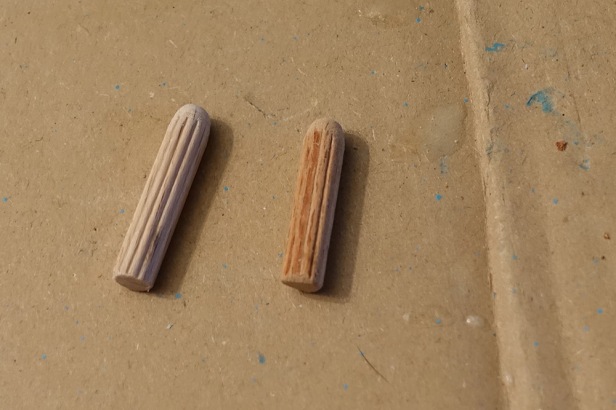 I painted the ends of the dowels and there it was finished! 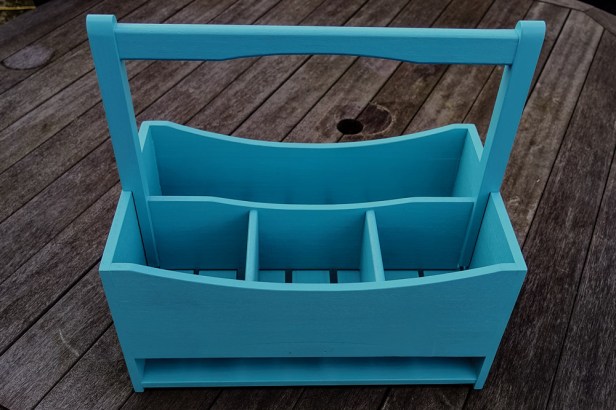